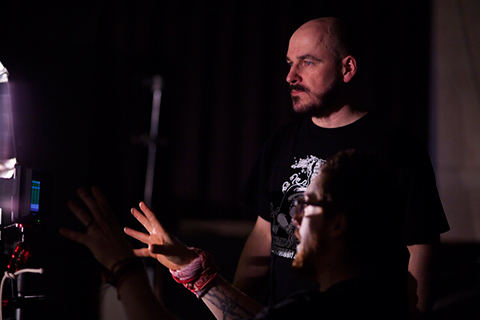 My name is Pete Tomkies. I am a director of photography and camera operator with my own Blackmagic Cinema Camera / DSLR shooting kit and experience of using many other camera systems. I also have range of lighting and other film making equipment. If you would like me to work on your film or video please get in touch!

I have worked as director of photography or camera operator on both fiction and non-fiction films for Leaky Shed Films, Sic Infit Productions, Yellow Raincoat Productions, Willow Tale Films and Courtyard Creations. I have also made music videos for the bands Sonic Boom Six, Bleach Blood and Ideal Forgery and shot live performance videos for The Tuts and Canter Semper.

In 2018 I completed my second short ONCE BITTEN... written by Kevin T Rogers and starring Lauren Ashley Carter. ONCE BITTEN... has already been selected for more than 30 festivals around the world and has won awards in the UK and Spain. Find out more about ONCE BITTEN... here

In 2015 I wrote and directed the short horror film TEAM, the first fiction film I had directed since I was a teenager. TEAM was screened at 25 film festivals around the world. Find out more about TEAM here

I began making films on 8mm when I was 10 years old and have been shooting film, video and still photographs ever since. I also run DT Craft & Design with my wife, textile artist Debbie Tomkies and do the video, still photography and web design for the business. My photographs have been featured in UK knitting magazines for the past 10 years accompanying Debbie's designs and technical features.

home • film • video • photography • about me